Standing up to Amy Schumer

Amy Schumer is a stand–up comedian whose “brave” material mostly consists of musings about her hookups – sexual encounters with relative strangers. And below is my review of her 2016 memoir, The Girl with a Lower Back Tattoo. Since finishing it yesterday evening, I have had this unstoppable momentum to write my feelings about it. And trust me, its not looking good.

One of her opening chapters is called, “An open letter to my vagina”. Here, she asks for forgiveness from her vagina because of all the things she has put into it throughout her life. As I read this, I stop reading to check to see if she had self published or had found a publisher for the book. So, turns out editors at Simon & Schuster must have read this and found it truly uplifting and useful? Brilliant.

America’s fascination with poop, fart and ass jokes have always amused me. This is why British slap stick seems elitist to us. As a child of the 80’s in India and as an immigrant to America of 15 years, I have long ago come to terms with my imaginary version of the hookup culture of the Western world, but for me the shocking reality of it comes in terms of this book. 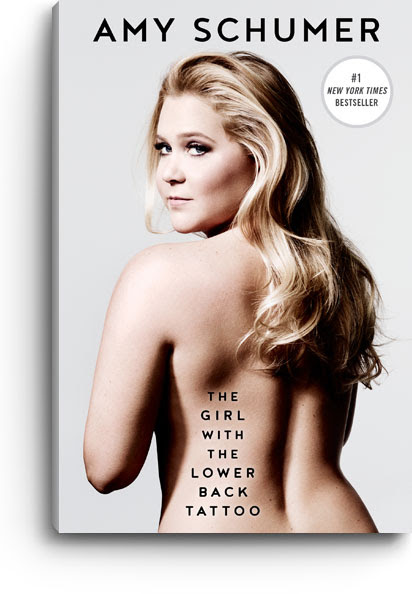 I want to call into question the placement of the chapter “On being new money” so early on in the book. She sounds so bratty and arrogant, including a few apologies for her attitude towards her new found luxury and monies. But at that point, we don’t warm up to her and so doesn’t yet have our sympathies for being a child of a broken marriage, of her being a domestic abuse victim or her truly persevering attitude towards becoming a professional funny girl.

There are poignant moments when she writes about her embarrassment as a teenager watching her dad shitting himself in an airport in front of scores of other passengers and you just want to go hug him and tell him its OK. You just want to be there for this old man who is suffering with MS. There are many places she mentions her tormented relationship with her ex-boyfriend. But she doesn’t offer much in advice or lessons learnt from those episodes with the abusive, knife wielding “Dan”.

Here’s the name of one chapter. “Excerpt from my journal in 2001 (age eighteen) with footnotes from 2016”. Yawn. Can you leave anything to my imagination please Amy, without feeding me these footnotes?

In the chapter “Things you don’t know about me”, she wants us to know that no one has ever come on her face. In “Things that make me insanely furious”, she reveals that black jelly beans and also black licorice make her mad. This chapter is so non-value add, that it makes me sad and wonder, “So fucking what??”. She dedicates an entire chapter on how she was made to lose her virginity. She doesn’t get the sympathy she deserves because of the graphic nature of her words. By the way, would you care to know how I lost my virginity? Yup, I thought so. Or maybe you would if I were a celebrity telling sex jokes.

Also, why do some of the best (relatively speaking) chapters of the book occur at the 80% mark, when you can’t quit reading because you have already invested so much time of your life on it. The chapters, “Can’t knock the hustle” and “NYC apartments” are inspiring to a certain extent because she talks about how she had a single minded goal of becoming a stand–up comedian all her life and the great difficult lengths she had to go to achieve it. Amy, why can’t you tell us more about how to handle disappointment, how to improve oneself, how to persevere?

Why Amy, why is your entire book not the answer to, “How to become a stand–up comedian?” instead of it only being a chapter in it?

Fans might claim versatility owing to the wide range of topics she goes into and that she is offering a full package of herself to us. My point is, she doesn’t have to remove these chapters in their entirety. She can consolidate all the information she wants to relay about her one night stands, alcohol infused blackouts, and every other trivial sexual encounter detail into a huge chapter with a disclaimer warning to skip if necessary.

Who is this book for, you ask?
Someone who can stomach gross out humor with detailed descriptions of her intimate bedroom scenes with men. It has won the 2016 Goodreads Choice Award for Humor. There you go, don’t take my word for it, go read it.

Full disclosure: Last week, I created a new email ID to signup for yet another free month on Netflix to watch her show, The Leather Special that released in March. I don’t know yet if I will go through with watching it.

This site uses Akismet to reduce spam. Learn how your comment data is processed.